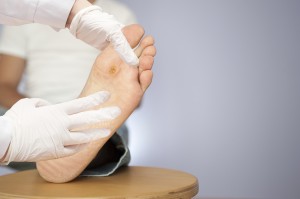 It’s well established that diabetic patients with foot ulcers are at an increased risk for amputation; now a recent study suggests these patients may also have impaired cognitive function, making it far more difficult for them to care for foot ulcers or to seek care when symptoms develop or progress.

At the conclusion of the study, the authors found the patients who had foot ulcers in addition to diabetes had lower cognitive scores across all cognitive tests compared to those who did not have foot ulcers, even after adjusting for possible influences like smoking and vascular disease. The authors also compared patients’ current cognitive states with estimates of cognitive status prior to developing foot ulcer symptoms and found patients in the foot ulcer group had a significant decline in cognitive functioning between the two states, suggesting a relationship between foot ulcers and a reduction in cognitive ability.

Although the authors noted the study design prohibited drawing a specific cause-effect conclusion, they said the results underscore a paradox that has significant implications for patient who have foot ulcers – namely, that these patients have more challenges when it comes to care, but fewer cognitive resources to effectively manage that care, a combination that can significantly increase the likelihood these patients will require amputations eventually.

“The results imply that ‘[diabetic foot]’ may refer not only to the physical condition but also to a more generalized complex state involving significant cognitive changes as well,” they wrote. The results also highlight the need for ongoing cognitive testing in diabetic patients with foot ulcers, they added.

Foot ulcers are among the most serious complications and symptoms of diabetes, requiring prompt action and appropriate, effective treatment. Dr. Felix Sigal is a leading provider of diabetic foot care for patients throughout the Greater Los Angeles area, participating in cutting-edge clinical research to help patients get the most advanced care options available. To learn more about Dr. Sigal or to read about clinical studies being conducted at the Foot & Ankle Clinic, visit the website or call (213)365-0793.